How to Transfer Music from iTunes to Google Nexus 6P/5X

This year Google Nexus phones, especially Google Nexus 6P and 5X are much more popular than before because of their lower price and higher configuration. This type of phone is compatible with most major carriers, which means that you can switch among carrier plans without swapping your SIM card. Many people probably can’t wait to switch his or her iPhone to Google Nexus. But as an iTunes user, you may amass a huge collection of music in your iTunes. What you need to do is to transfer digital music collection from iTunes to your new Google Nexus 6P/5X/6/5.

1. Download and install Jihosoft iTunes to Nexus Transfer into your computer. Then launch it.
2. In the “Restore Data” section, select “From iTunes Backup” to sync iTunes music to Nexus 6P/5X. 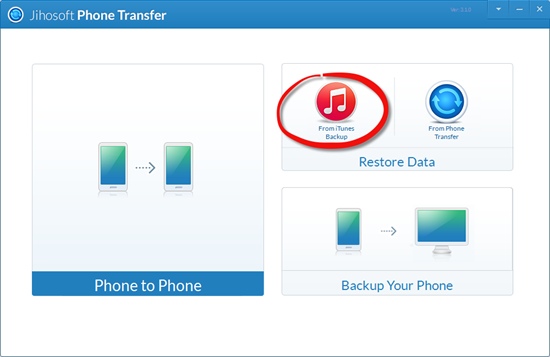 3. Connect your Google Nexus 6P/5X/6/5 to computer via a USB cable, the device will be immediately detected by the program.
4. The software will automatically detect all iTunes backup files on this computer, select the one that you wish to restore to your phone from the drop-down list, mark “Music” from the list and tap “Start Copy” to start transferring, then you’ll find your iTunes music in Google Nexus’s Music app. 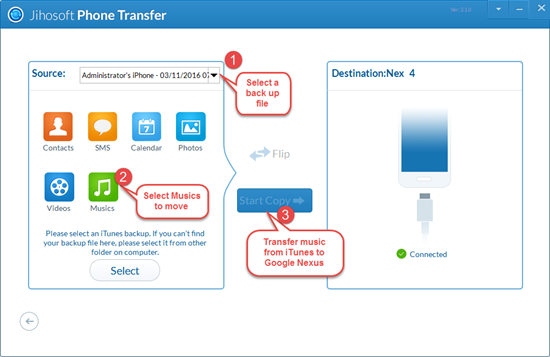 Have you switched your iPhone to other Android phones like the hottest Galaxy S7/S7 Edge and been anxious about transferring music from iTunes to new Galaxy phone? Don’t worry. Jihosoft Phone Data Transfer can also help. Have a try.