It’s reported that 89.9% of Google Nexus users encountered data loss due to various reasons, such as accidental/unintentional deletion, factory reset Nexus, virus attack, ROM flash, rooting, etc. When the accident happens to you, no need to worry at all. Here we provide two options to recover data from Google Nexus 4/5/6/7/9/10/5X/6P etc.

– Get the nexus data recovery tool. Download and install Jihosoft android data recovery (android recovery mac) to your computer.
– Run the nexus recovery tool & connect your Google Nexus to computer.
– Let the program identify your Nexus device. If you want to restore data from Nexus phone internal memory, you need to root your android device at first.
– Scan deleted/lost data on Nexus. After the tool detected your device, click “Start” to begin scanning.
– Preview and recover data on Nexus. You can freely preview the recoverable data on the result list. Mark the wanted files and tap “Recover” to save them on computer. 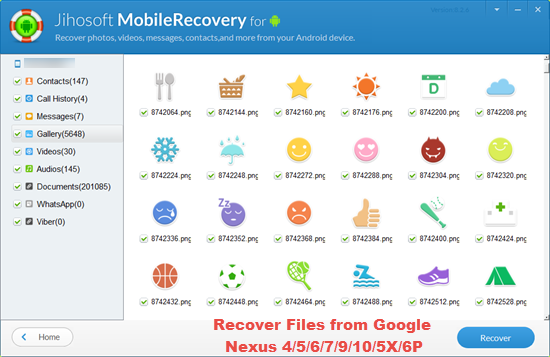 If you have backed up your Google Nexus to Google account before, it’s quite simple to get back data from backup library.

– The apps settings and contacts will be restored automatically upon the next time you sign into your Google account. Or you can go to “Settings”-> “Personal” -> “Backup & Reset”, then check the box next to “Automatic restore”.

– The pictures, music, videos and other files you backed up to Google drive can be recovered easily by downloading the files to your nexus.

Note: The contacts, text messages and call history stored on SD card cannot be backed up & restored in this way.

Warming Tips:
– You should know that the deleted files probably be overwritten by new content, which makes the files unrecoverable. Thus, don’t use your Google nexus device once you noticed the data loss.
– Regular backup your Google Nexus. You can get help from 3-rd party apps like Android Manager to help you backup & restore data on Nexus, as well as other android device like Samsung S7, Samsung S7 edge. Moreover, this app can also help you transfer data between Android and iOS device.