The Panasonic AG-HPX170 is an ultra-mobile P2 HD handheld camcorder delivers groundbreaking new usability features in several key areas, along with excellent color and relatively noise-free video. The AG-HPX170 is smaller and about 20 percent lighter than the popular AG-HVX200 that precedes it. It is fully solid state and comes with a host of enhancements including a new 1/3″ progressive 3-CCD imager system, an HD-SDI interface, metadata input and management.

Panasonic AG-HPX170 is a potent filmmaking tool which is able to shoot videos in MXF format, but the HD experience also brings problems to users who want to edit AG-HPX170 MXF footages in FCP X/7/6, for example:

“I recorded some clips last week with my Panasonic AG-HPX170. I want to edit them in FCP then share it on Facebook, but I can’t import these P2 MXF videos into Final Cut Pro X. What should I do?”

Well, the reason is that FCP does not work perfectly with the Panasonic P2 MXF codec. Therefore, to edit MXF in Final Cut Pro, you will need to transcode AG-HPX170 MXF to ProRes 422 first. Here, Jihosoft Video Converter Mac is recommended to help you do the conversion. By using it, you can convert P2 MXF to ProRes MOV without quality loss, and then import to FCP for further editing. 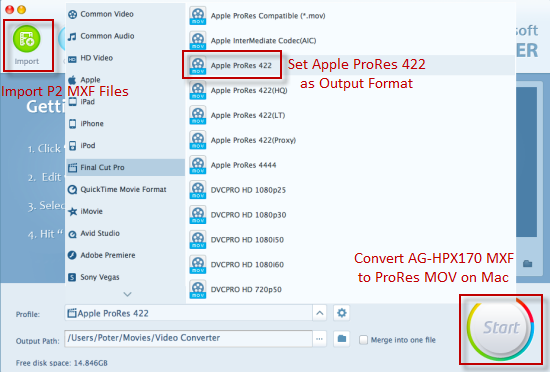