How to Convert Sony PMW-F55/F5 XAVC to AVI

If you have no idea what to do with the new XAVC format video recorded with your Sony PWM-F55/F5 cameras, you can convert XAVC to AVI format, which has many great advantages as follows:

To Convert Sony XAVC to AVI, you can download Jihosoft Video Converter, which can perfectly input both 4K and 2K XAVC video from Sony PMW-F55 and Sony PMW-F5 cameras and convert them to AVI file format with various codecs such as Divx, Cinepak, Indeo, DV, MJPEG and uncompressed RGB or YUY2 to satisfy users with different needs.

1. Open XAVC to AVI Converter on your computer.
2. Import XAVC video footage from computer to the program.
3. Select to output your preferred AVI file format from “Profile” drop-down menu.
4. Hit right-bottom round “Start” button to carry out the XAVC to AVI conversion. 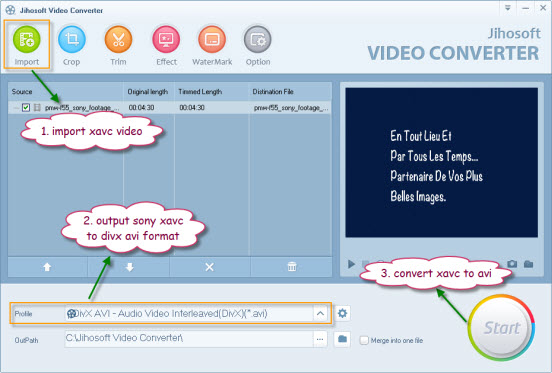