Home > Video Editing Tips > Can You Flip A Video On iPhone/ Android?

Can You Flip A Video On iPhone/ Android?

As we carry our phone with us all around, we constantly use the phone camera to record videos for later reviewing and sometimes we just found that the video was filmed sideways. For most of the people, they would tap ‘Edit’ in the Photos app and look for a ‘Rotate’ button. However, there is no edit button for videos like there is for photos. You can only edit the video by trimming the length. 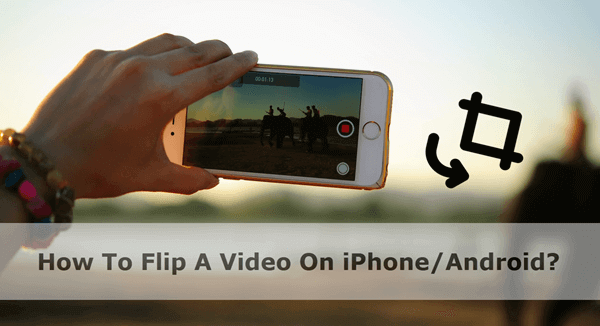 So, can you flip a video on iPhone or Android phone? Yes, the answer is certainly YES! What you need is a video editing tool. In the following text, we will introduce some helpful tools for you to fix upside down video on Android/ iPhone.

Part 1. How to rotate a boomerang video on iPhone?
Part 2. How to fix upside down video on Android?

Part 1. How to rotate a boomerang video on iPhone?

iPhone with iOS 13 and later

For iPhone with iOS 13 and later, you can rotate the video directly in the built-in Photos app. Here are the steps:

For iPhone with iOS lower 13, there is no ROTATE button in the built-in Photos app. Still, you can fix the problem with the help of iMovie, which is a native iOS video editing app launched by Apple. Next, let’s see how to use iMovie to mirror a video on iPhone.

There are also third-party video editing apps available to rotate a boomerang video on iPhone. If you are interested, you can try VivaVideo, InShot, Filmmaker Pro, Enlight Videoleap.

Part 2. How to fix upside down video on Android?

Unlike iPhone, the Android built-in photo app does not have the functionality to rotate video. Then, the Google Photo app is what we need to help flip a video on Android. If your device is relatively new, then it should have come with Google Photos pre-installed straight out of the box. If it didn’t, you can download the app from the Play Store.

The Google Photo app allows you to upload local video and photos to the cloud, so you can access to the media files anytime anywhere. To use Google Photos, you need to log in it with your Google account. Then sync your photos and video with the app. After that, follow these steps to fix upside down video on Android device:

Other third-party Android video editing apps like VideoShow, PowerDirector, KineMaster, Quik, VivaVideo, Funimate, Magisto are also helpful to flip a video on Android. So, if you don’t like Google Photos, you can turn to other options.

For people who prefer editing the sideways video on computer, they should transfer the video to computer first. Then, they may refer to this guide: How To Change The Orientation Of A Video? (Desktop)