When your Android phone/tablet is full of various files like photos, audios, videos, text messages, contacts, etc., you may want to backup and sync them with your computer instead of deleting them to free up the storage. Fortunately, Android PC(Mac) Sync software and Cloud storage offer the feasible solutions. Read on, this article is going to tell you how to sync android with PC/Mac by two simple ways.

Way 1. Sync Files Between PC(Mac) and Android with Cloud

– Download and install Google Drive app/software on your android device as well as computer.

– Start “Google Drive” on your computer. Log in with your account and tap “My Drive” to select files/folders from your computer.
– Click “Open” button, the contents you just selected will be uploaded soon.
– Navigate to your Android device, launch Google Drive app and log in. All the synced files can be read over there. 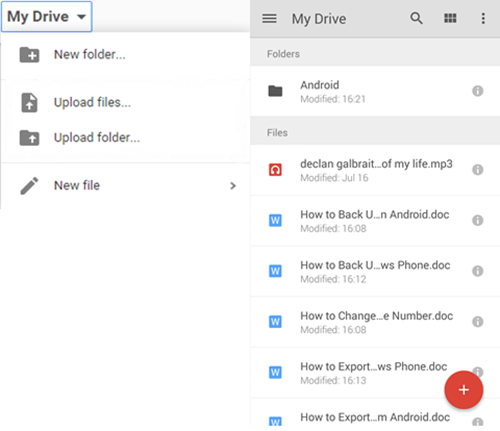 – Start Jihosoft Android manager and plug your device to computer with an USB cable. Tap “Backup Your Phone” penal.
– When the android device is detected and identified, select the specified content you want to sync with computer, then click “Backup Now”.
– Wait for a while for the syncing process, when it is done, you can check the synced files on computer anytime.

Jihosoft Android Manager also empowers you sync any android folders (which backed up by this program) from computer to any android devices. Steps for syncing files from PC/Mac to android: Start the program-> select “Restore Data(from backup)” -> choose backup folder-> tap ”Restore Now”. That’s it. 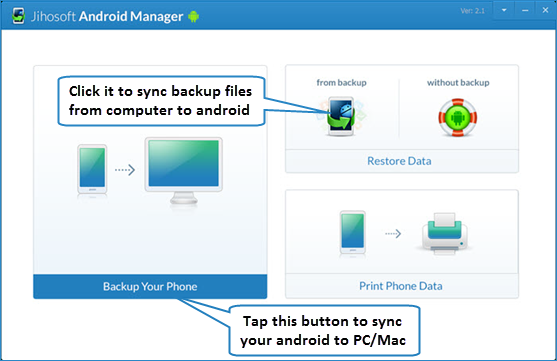