Home > Video and Audio Tips > MP4 to ProRes, How to Convert MP4 to Apple ProRes on Mac

MP4 to ProRes, How to Convert MP4 to Apple ProRes on Mac

MP4 or MPEG-4 Part 14 is a digital multimedia format most commonly used to store video and audio, but can also be used to store other data such as subtitles and still images. As well as most modern container formats, MP4 allows streaming over the Internet. The official filename extension for MPEG-4 Part 14 files is .mp4, but many have other extensions, like .m4a and .m4p.

Is It Possible to Edit MP4 Video in Final Cut Pro on Mac OS?

Perhaps you would like to edit MP4 files with Final Cut Pro or other Mac based applications on Mac OS X. However, MP4 files can’t be imported into the Final Cut Pro software, for the complex video codec.

“Please Help! I am having trouble to import some MP4 footages I have previously recorded to Final Cut Pro X. Is there any software to convert MP4 to ProRes for FCP?” 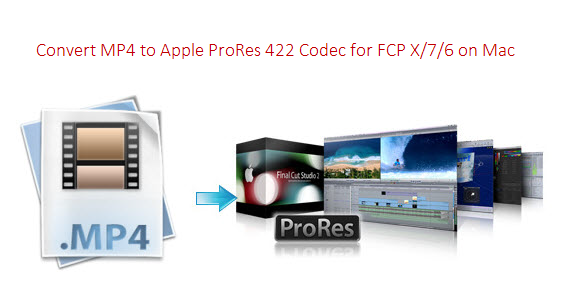 The answer is positive. For smoothly editing MP4 files in FCP X/7/6, you can convert MP4 to ProRes, more editing-friendly format for Final Cut Pro. To get the conversion done, a third-party tool is needed. Here Jihosoft Video Converter for Mac is highly recommended. It is a powerful and user-friendly Mac video converter, which can fast convert MP4 to ProRes 422 for use in Final Cut Pro directly.