GoPro must be considered as the industry leader when it comes to action sports video. Their HERO cameras are heavily associated with extreme sports and adventurous activities. GoPro cameras are used in a plethora of conditions, like cycling down a rocky ravine, skiing off-piste, skateboarding on a public road, or windsurfing in choppy waters, to capture amazing action scenes and record incredible vantage points.

GoPro cameras have been used by many athletes, action-sports enthusiasts, film producers, photographers and videographers to take high-quality video. For example, the famous HD Hero cameras capture video in a variety of resolutions and frame rates up to 1080p Full HD. The Hero4 Black, in particular, is capable of recording 4K30 and 2.7K60 Ultra HD videos. But the thing is, GoPro HD/4K videos are not widely accepted by various multimedia devices and applications.

“Hey Guys, I am just curious to know what you guys use to edit the footage from a GoPro HD on Mac. I have Final Cut Express, but it won’t read them. Any idea?”

“I have a GoPro HERO4 Black and shot some 4K videos for the first time today. But they won’t play on Microsoft Media Player. Please kindly update me a solution.”

How to Convert GoPro HD/4K Videos to AVI, MP4, etc. 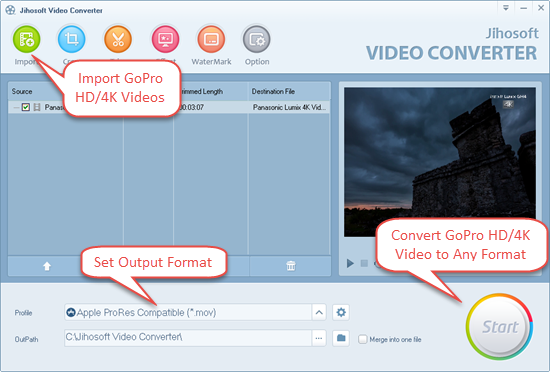 Import Note:
If you have a mass of recorded 4K Ultra HD videos stored in your GoPro Hero4 Black camera, and want to enjoy them on your 4K Ultra HD TV, Jihosoft Ultra HD TV Converter would be your top choice. This tool can convert GoPro 4K videos and make them play smoothly on all 4K UHD TVs like Samsung, Sony, LG, Panasonic, etc.