How to Play MTS on Kindle Fire

Since its launch two years ago, the Kindle Fire has developed a reputation as a budget tablet. The mostly plastic construction and the low price (Kindle Fire pricing starts at $139 for the cheapest 7-incher) give it the whiff of a second-tier device, especially compared to the iPad’s sleek aluminum body. The Kindle Fire makes it easier than ever to watch videos, listen to music, check emails, read books, and buy stuff from Amazon.

The “all-new” Kindle Fire HD costs exactly the same as the Hudl, making the supermarket tablet the most direct rival. The angular design matches the new Fire HDX models but the Fire HD doesn’t get the ‘X’ suffix as its screen has a 1280×800 resolution, rather than Full HD. 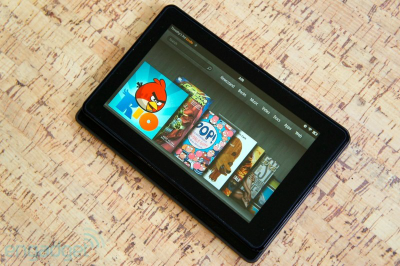 I am desperately to play MTS files on my new Kindle Fire HD. I am pretty ignorant with usage of these tablets so appreciate if anyone can help me out!

Like the person above and want to open MTS files from your Canon, Sony, Panasonic, or JVC camcorder on the tablet? It’s a pity .mts is not a file format supported by Kindle Fire. The types of video supported on the Kindle Fire tablets mainly include 3GP, 3G2, MP4, M4V, WebM, and MKV. If you want to play MTS on Kindle Fire, you need to convert your MTS files to one of the formats mentioned.

1. Install and start the video conversion tool on your computer
2. Locate and add the MTS files you wish to convert into it
3. From the “Profile” drop-down menu, select 3GP or MP4 as the output format
4. Pick an output path and click “Start” to begin the conversion 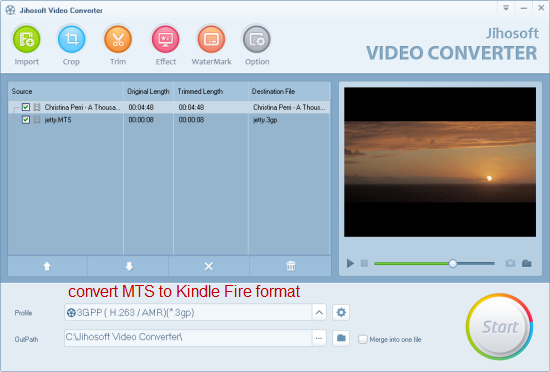 Tips: you can convert multiple MTS files at each time. Meanwhile, you can adjust the output video’s resolution and frame rate to make the converted files playable on Kindle Fire with best result.