JVC Everio camcorders offer full HD image quality, provide most people with everything they need from a high-definition camcorder. You can record native 1920×1080 resolution videos regardless of the model you choose. All models feature A.I.S (Advanced Image Stabilizer) technology for effective camera-shake compensation, especially in the wide-angle range.

Problem: JVC Everio camcorders enable you to create video memories of people or events virtually anywhere. They usually record videos in .mod format for standard definition. However, when you want to import the MOD footage to FCP to edit your own movie, the problem occurs, for example:

“I’ve bought a JVC Everio GZ-HD500BUS and recorded a lot of videos, but when I tried to import these .mod clips from camcorder to FCP it didn’t work. Please help!!”

Solution: Well, anyone who wants to edit their JVC Everio MOD footage with FCP will meet the similar importing problem. It is because that MOD is not the format accepted by Final Cut Pro. Here we recommend an easy-to-use Video Converter for Mac to you. It offers all-in-one solution for JVC Everio MOD video importing, with which you can convert JVC Everio MOD to Apple ProRes MOV for further editing in FCP X/7/6.

Get Started: Get MOD Videos from JVC Everio Camcorder to Mac 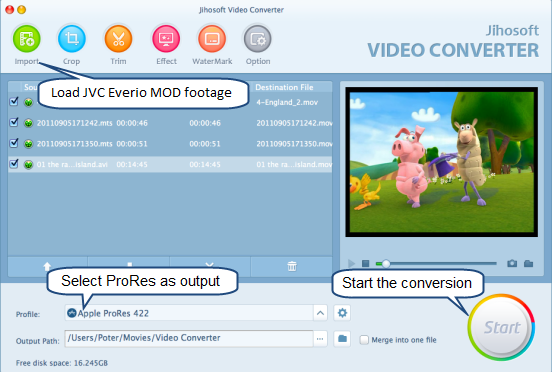