“I am currently using an HTC and about to change to a new phone. But I am not sure how to copy data (musics, contacts, sms messages, etc.) to the new Galaxy S7. If there is any way to realize it, help me please. Yeah, one more thing, I want to move the data directly and with no complex steps.”

Want to quickly transfer contacts, photos, videos, messages from HTC One/Inspire to Samsung Galaxy S7/S7 Edge/S6/Note7? This is one of the pains after we get a new phone. You are in the right place, read this article and you’ll find it easy to get the transfer job done.

Jihosoft Phone Transfer is a data transfer program which is designed to transfer data from android to android, including contacts, photos, videos, messages, musics, apps, etc.

Step 1: Download. Install and run this transfer tool on your pc.
Step 2: Connect both of your Samsung and HTC to pc via USB cable and click on “Photo to Phone”.
Step 3: Select the data that you want to transfer in the source phone panel, then tap on “Start Copy” to transfer from HTC to Samsung. 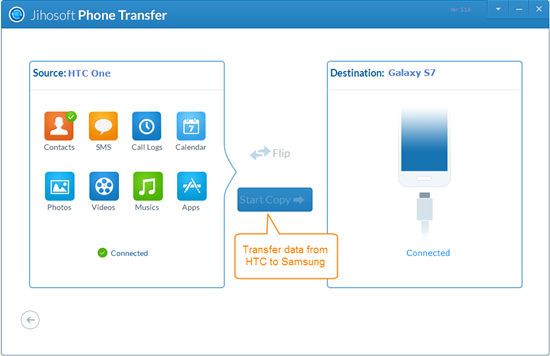 Samsung has created an app which can move not only contacts, but other data as well, such as pictures, calendars, messages, notes, musics from android or iPhone to Samsung: Samsung Smart Switch.

Step 1: Download Samsung Smart Switch on both of your HTC and Samsung from App store.
Step 2: Respectively choose HTC and Samsung as “Sending device” and “Receiving device”. Then press Connect on HTC to make the two phones pair up together.
Step 3: Select the data you want from the sending device and tap on “Send” to start the transfer process. 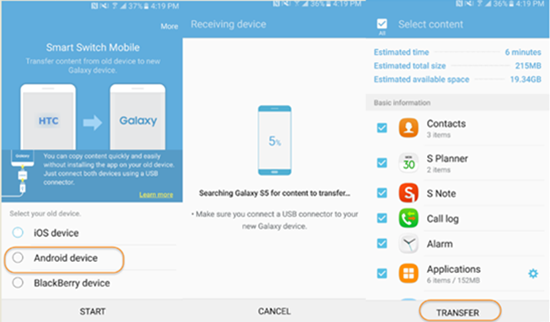