“From a client I got raw material to edit: 8 huge files, all MPEG, which won’t load into FCP X. It seems that I need to convert MPEG to ProRes 422 for Final Cut Pro. Can anybody share me a way to do the conversion? Any help would be appreciated.”

Have you ever met such importing issues while editing MPEG with FCP? It is actually a common problem. MPEG is not a proper editing codec for use in FCP, so you’d better transcode MPEG to ProRes MOV. Just follow this article you will learn how to convert MPEG files to Apple ProRes 422 for editing in Final Cut Pro.

MPEG to ProRes Converter for Mac is an excellent tool to convert MPEG-1, MPEG-2, or MPEG-4 video files to Apple ProRes MOV, so you can import into Final Cut Pro for further editing. Before converting MPEG to ProRes 422, this software allows you do some simple editing, such as, crop MPEG video, trim MPEG file, merge MPEG clips, add watermark, add special effects, etc.

In the list of “Profile”, select Apple ProRes 422 (*.mov) as output format and customize the output video settings. 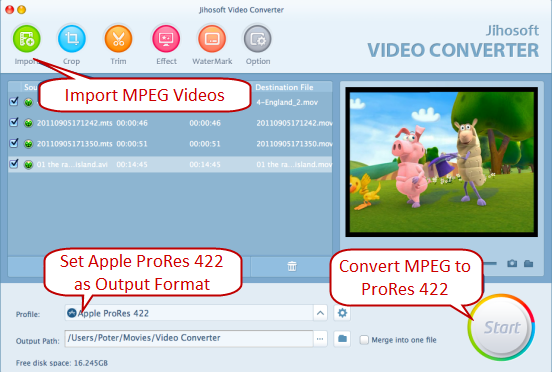 MPEG, short for Moving Picture Experts Group, is a working group of the ISO, which sets standards for audio/video compression and transmission. The MPEG standards consist of different Parts. Each part covers a certain aspect of the whole specification. The major MPEG standards include the following:

MPEG-1: Coding of moving pictures and associated audio for digital storage media at up to about 1.5 Mbit/s. The most common implementations of the MPEG-1 standard provide a video resolution of 352-by-240 at 30 frames per second.

MPEG-4: Coding of audio-visual objects. MPEG-4 is a graphics and video lossy compression algorithm standard that is based on MPEG-1 and MPEG-2 and Apple QuickTime technology.