Easy Way to Convert MTS to FLV for Uploading Online

MTS is a high definition digital video camera recording format that supports 1080i and 720p, commonly called AVCHD. It is widely used by Sony, Panasonic and other HD camcorders. Software that has native MTS support is rare. After shooting some MTS files for a party, conference, wedding, baby growth, etc, do you want to upload them to video sharing site like YouTube or embed them to your own site?

Then converting MTS to FLV is your best choice, because FLV is a Flash video format which works the best to deliver videos online smoothly. Various programs can convert MTS files, however, to finish the conversion without lowering the original quality, Jihosoft Video Converter is strongly recommended to you. It allows you to convert MTS to Flash FLV while 100% preserving the HD video effect on Windows 8/7/XP/Vista.

How to Convert MTS to FLV on Mac/PC

Just in a few clicks, the conversion can be done with this smart MTS to FLV converter. (Note: Jihosoft Video Converter for Mac is also available, which is compatible with Mac OS X 10.6-10.8. Download one to your computer by different operating system.)

1. Double click the application icon to run the software. Load the Camcorder MTS videos into it.
2. Select “FLV- Flash Video Format (*.flv)” as the output from “Profile” -> “Common Video”. (To configure the output FLV’s resolution, frame rate, and bit rate, click the gear button beside.)
3. Begin the conversion by hitting the “Start” button on the bottom right. 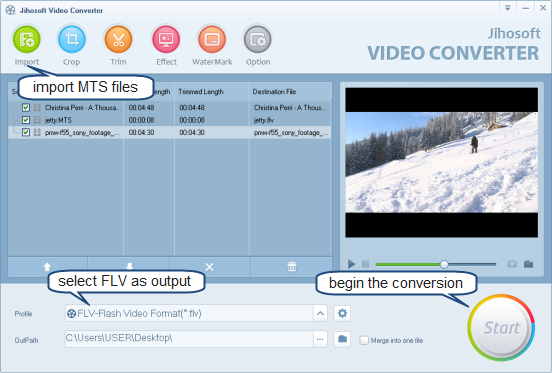 Tips when converting MTS to FLV:

After you import the MTS footage to the program, you can take snapshot from a video while you are previewing it. Meanwhile, to personalize the video clips you recorded, you can add text or image watermark to them. The conversion time cost varies depending on the file size of the source videos. If you don’t want to wait for the conversion to be finished, you can tick the option to shut down your PC when conversion is finished.