How to Transfer Apps and Data from Android to Android

When upgrading to a brand-new Android phone, you will not only need to move contacts, messages, photos, music, etc, but also to download all of your favorite apps onto the new device. You can always look at your old Android phone then search the Google Play Store to download and reinstall apps individually. But it can be quite inconvenient and take a lot of time. Actually, downloading Android apps onto a new device doesn’t need to be so difficult. Here we’ll introduce several ways to transfer apps from Android to Android.

If you have root access on both your old and new Android phones, you can take advantage of an app like Titanium Backup. It can back up your old Android phone apps and restore to the new one. 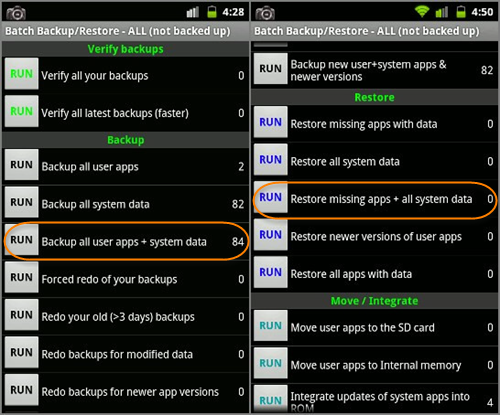 For those who are not rooted and running Android 5.0 Lollipop, Google has developed a solution to transfer apps between Android devices. It requires that you have your two devices registered with the same Google account, and your old phone has been backing up and syncing app data to Google’s cloud. 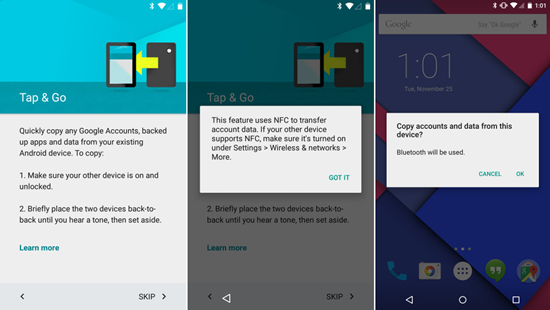 Option 2: Get Your Apps & Data

If your old Android phone doesn’t have NFC, don’t worry, Google has improved the standard copy data feature and gives you the choice to restore apps and data directly to your new Android phone.
1. While setting your new Android device, skip the “Tap & Go” feature and set up your Google account. You’ll be prompted to restore your new phone with a backup from old one.
2. Select the old Android device you want to restore from and choose which apps from that device to install. 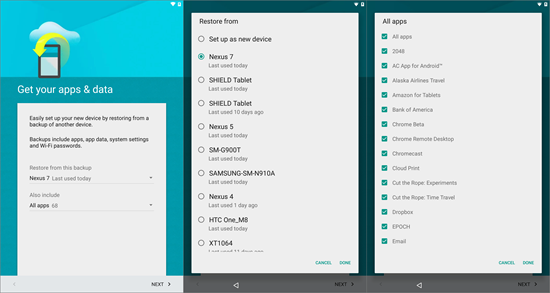 While the methods above will transfer your apps and data, they won’t move any of your stored photos, videos or files. As a workaround, we recommend you use Android App Transfer. It enables you to transfer Android apps to new phone and supports more than 2000 devices from Samsung, HTC, LG, Sony, Moto, Google, Huawei, etc. In addition to apps, other data like contacts, messages, call history, calendar, photos, videos, and music can be transferred between Android devices in one click. Click here to learn how to use it. 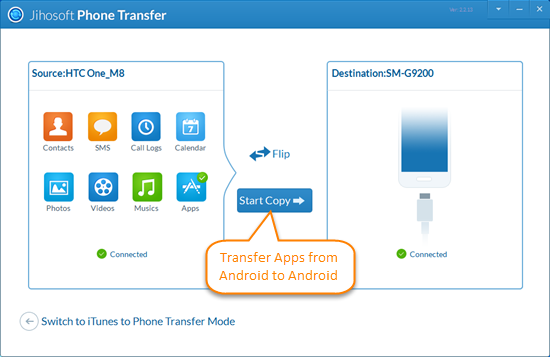