A Complete Comparison File Systems: FAT32 vs. exFAT vs. NTFS

You might have heard about the terms of FAT32, NTFS or exFAT and need to decide which one to choose as the best file system for your SD card or USB flash stick. Don’t worry. In this article, we are going to introduce the three file systems so that you’ll know the difference between FAT32, NTFS and exFAT as well as their pros & cons and compatibility. 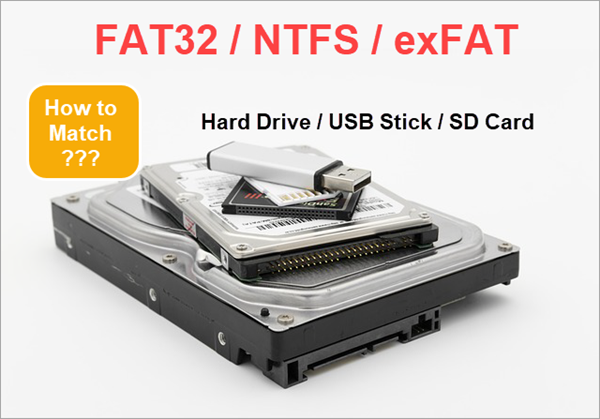 In order to avoid problems like slow USB transfer speed or “the file is too large for the destination file system”, it is necessary to know all the features and limitations of different file systems. For example, Windows operating system gets installed making the use of NTFS file system for partition formatting. In a similar way, FAT32 is used for files in removable disk drives and other such devices which have interface-based storage to keep the files. Basically, the exFAT file system is the modified derivation of FAT32. Keep looking if you need more information to differentiate FAT32, NTFS and exFAT files systems.

While we are working with computer and other storage devices, all the workabilities are based on some kinds of algorithm and coding. There are some rules which are implemented to bring out that feature and function of every system. The file system is one of such sets of rules which are derived to process the data storage and keep it secured in a storage device. The computation system is brought in use to store the files in a secured manner.

File system surely is important to make the data stored with its value in the storage device. If it is not there, then only the undefined data will be stored in it. There are many types of file systems which can be used to store the files in different storage options or devices. They are Flash File System, Disk File System and many others. FAT32, NTFS and exFAT are the types of Disk File System.

How to format a USB stick to FAT32, NTFS or exFAT:

It is very easy to format a storage device to any of the three file systems on a Windows computer. Just right click on the disk drive in Windows File Explorer and choose Format, then you will get the options.

Allocation Unit Size, also known as Cluster Size is an important part of file systems. On a partition of the file, the smallest space occupied by it is termed as Allocation Unit Size. You can vary the file size as per your need ranging from 4096 to 2048K. At the time of formatting, the default allocation unit size is applied to all the files. The file is stored into the same number of pieces as its allocation unit.

Tips: Due to the mechanism of file systems, the data you deleted is not immediately removed from storage devices before new data is saved. Therefore, it is still possible to recover lost files from SD card, hard drive, USB flash stick or computer with a good data recovery software.

FAT stands for File Allocation Table which is one of the oldest file systems used for storage of data. Initially, it was designed as an 8-bit FAT file system to store the data into an 8-inch floppy disk.

With many modification and advancement, FAT32 was introduced in 1995. It is a great aid to store the files into the removable or external storage device or drives. Up to 4 GB of single file and a total of 8 TB as the maximum disk size for FAT32. So, it is used to store only the small files not the apps or files having a large size. To overcome this limitation of FAT32, NTFS is used.

Compatibility: All version of Windows, Mac, Linux, and almost anything with a USB port.

As we have already seen that FAT32 is not capable to store the large files. To nullify that limitation, NTFS is selected as the default file system with modern techniques to store the file with a large file and partition size.

NTFS is also featured with disk usage quotas, reparse points, sparse file support, file-level encryption and distributed link tracking. Moreover, it is also designed so as to display backward compatibility. That means, it is not limited to be used with any latest version. You can use this file system to store using any previous versions. However, this file system is somehow limited to Windows XP and later versions of Windows. You can only read the formatted files of NTFS using Apple’s Mac OSX. You can edit the file of NTFS using some particular versions of Linux.

Compatibility: All version of Windows, Microsoft Xbox One, Mac (read-only) and Linux (write support for some versions)

exFAT or extended FAT is the modified and advanced file system which is used to fill the space of FAT32. It is mainly used in modern digital cameras and in ball games. Moreover, it is also used to format the high capacity SDXC memory cards. It is capable to support the formatting storage of large files and is lightweight as well. This is the reason why exFAT is considered in many fields where there is a need to support files larger than 4 GB. exFAT SD card is used in daily life for many purposes where the FAT32 is not capable to support due to its limitations of file size. You can copy a full HD movie easily using exFAT SD card and do many other such works.

At present, Microsoft is looking after the US Patent 8321439 which is developed for accelerating the file search speed. It is named as Quick Fine Make Lookup through which one can find his/her file by using Name hashtag or such keywords. This set of the specification has not yet brought up for the exFAT file system due to which this file system users are using a restricted licence over their files. They can get access to the file’s licence completely after the release of full specification set by Microsoft. Due to this, vendors from many countries are not using the exFAT file system for the open-source operating system or any commercial software.

Hence, you have seen all the basic and important features of these three file systems. Now, it will be easy for you to differentiate these file systems and select them appropriately for storing and formatting your files. Generally, exFAT is ideal for flash drives, NTFS for internal drives, and FAT32 is more widely supported by devices. However, in some cases, it is necessary to format a storage device as a file system against the regulation above in order to make the device work smoothly. If you have any queries related to these file systems, or whether you really need to safely remove USB, write it to us using the comments section.