How to Watch and Play YouTube Videos Frame by Frame

Whether you’re watching something as complicated as a time-lapse video or something as petty as a cooking tutorial, there are quite a few times when watching a YouTube video frame-by-frame comes in handy.

a. Watching a Time-Lapse

Catching petty details in time-lapse videos can be a nightmare as sometimes it is nearly impossible even if you slow the video down, hence watching it frame by frame is a perfect solution.

b. Watching a How-to Video

Here, catching details are essential; otherwise, there’s no point in watching such videos, which sometimes becomes difficult and again is easily solved by watching it frame by frame.

When you need to edit a video and want to crop it from a specific position, but it becomes very difficult to stop it at the right moment.

Some people do it for the sake of knowledge to know about videos and frames, diving into the details for sort of research.

Below, I’m going to give you a bit of briefing about the most common methods and the times when they are useful and a conclusion following that.

The 4 Best Ways to Watch YouTube Frame by Frame

YouTube player itself provides you a way to watch the video frame by frame; you don’t need to use any third-party software or don’t even want to leave YouTube. Below given is a step by step guide on how to do it.

If, for some reason, the above method didn’t work for you or you are something like an animator and need to study the video more closely, using an online tool such as this might be the thing for you. Below given is step by step guide on how to do it on a different online frame by frame editors.

Type anilyzer.com in your URL bar to get to the site. Once there, the steps to watch a YouTube video frame by frame here are more or less the same as the above-mentioned framebyframe site, the only noticeable difference comes as the interface which is a bit different otherwise, the controls available and the procedure for doing it are almost the same, so you can just follow the steps I gave you above. 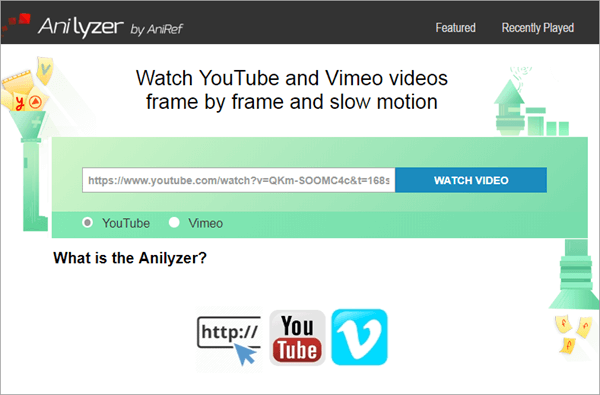 Below, I will be mentioning some of the most used video editors you can download to edit and watch YouTube videos frame by frame.

This can be one of the best options for relatively simple tasks as this as built-in with the windows. It gives you quite a good range of basic video editing options frame by frame as it has a timeline feature in it. I have listed the steps down below to get you started:

Tips: Before editing, you need to download videos from YouTube to the computer first. However, due to copyright issues, YouTube does not allow users to do so. In this case, you can use a free YouTube video downloader software to get the job done quickly!

This can be thought of as a higher version of the software listed above. It has a relatively more complicated interface, a ton of more editing options and most of all, its powerful and even supports 4K video files. However, it’s not free to use, and the trial version converts only 30% of your file. Steps on using it are listed below:

Are you using an Apple Mac and are looking to get the editing done? Now, Mac systems are somewhat restrictive. You could argue it’s why they offer better protection, but would you want it as a trade-off and not be able to watch YouTube videos frame by frame?

The iMovie editor is designed to be used in the Apple environment. It is free to use and provides a lot of editing functions along with pretty good preset themes and supports 4K files too. The steps to operate are listed below:

That’s all that you need to do to get started. You can now find all of your favorite videos and watch them the way you want to.

Depending on your need, each one of the above-listed methods or view or edit the YouTube video frame by frame can come in handy, and each one has pros and cons of its own.

So, if you’re a person just regularly watching YouTube and have the urge to watch it frame by frame just out of curiosity, the best way to go is simply using the keyboard shortcuts given by the YouTube video player.

If that doesn’t work for you and you, for some reason, want to see it frame by frame with greater precision, you can go with the online frame by the frame video player.

However, if watching the video alone isn’t what you need and you need to edit it as well, you need to download one of the above-mentioned frames by frame video editors depending upon your work environment. They will be all you need for video editing, whatever the type of work you’re doing.