The Untamed (陈情令) is a Chinese web costume drama starring Xiao Zhan and Wang Yibo, and premiered on Tencent on June 27, 2019. The drama is adapted from Mo Xiang Tong Xiu’s novel Mo Dao Zu Shi”. With the five major families as the background, the Stygian Iron as the fuse, it tells the story of Yiling Patriarch (Wei Wuxian), who was resurrected 16 years later, and having a reunion with his intimate friend, Lan Wangji (Lan Zhan). Together they solved the mystery, killed the evil spirits, and finally won the victory, returning to the mountains and becoming the soul mates of each other.

This TV series has received rave reviews since its broadcast, and it is now more popular around the world. A few days ago, starring Xiao Zhan and Wang Yibo attended the fan meeting in Thailand. They also sang together the theme song, Unrestrained, and the scene was very spectacular. Recently, there was news that The Untamed (陈情令) would be broadcast in South Korea. It is conceivable that how popular this drama is! Currently, the web series has been released on YouTube and Viki, with a total of 50 episodes. If you want to watch this drama, we don’t recommend you to watch it online, because it requires a stable network and sufficient traffic. Instead, you can download the “The Untamed” drama to your computer so that you will not encounter a stuck or buffered situation when watching the video. 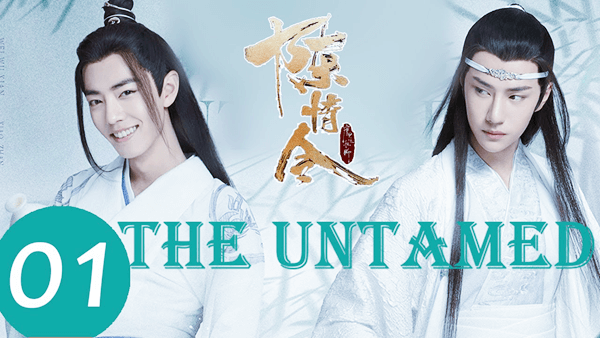 Due to YouTube’s restrictions on video downloads, we are unable to download videos directly from the platform, but we can borrow third-party software to download The Untamed Chinese drama from YouTube.

Jihosoft 4K Video Downloader is such a tool that you can use. With this powerful tool, you can quickly download videos and music from YouTube, Facebook, Instagram, Twitter, Reddit, Dailymotion, Vimeo, and other popular websites. Meanwhile, it also allows downloading the entire YouTube channel and playlist, which means you can download all 50 episodes at once, which is very time-saving! Even more surprising is that it also supports downloading subtitles( in multiple languages) and original audio, so that you can watch videos without obstacles, which is very practical!

Now, let’s take a look at how to download the “ The Untamed ” drama from YouTube with Jihosoft 4K Video Downloader:

Step 1. Click the download button provided in this article to download the 4K YouTube Video Downloader and install it on your computer with the appropriate prompts. After installation, run it and enter the registration code (if you have one) in the required box or try the free trial first. The free trial only lets you download five videos per day and has limited download speeds.

Step 2. Next, open YouTube, search for Tencent Video, go to the channel to find the playlist of The Untamed (陈情令) and then copy its link address. After then, paste the link into the program by clicking the “+Paste URL” button. A pop-up box will pop up where you can see all the videos in the list. You can check the episodes you want to download, whether to download the video cover and subtitles. After confirming, click the Download button. 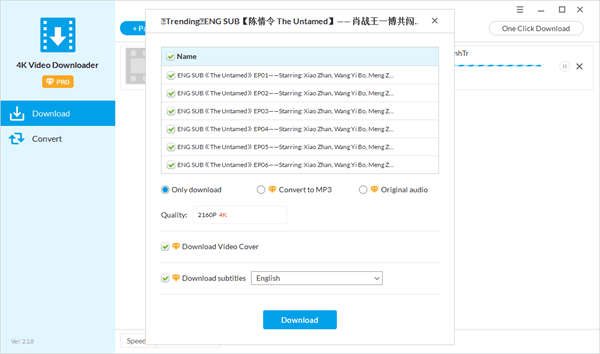 Step 3. The software will start parsing these videos, which can parse and download five videos simultaneously. After the analysis is successful, you can see the thumbnail and the video will start downloading. You can adjust the download speed at any time by using the button in the lower-left corner. After the video download is completed, it will be saved to the “Finished” tab and the scheduled folder. You can click to play the downloaded drama directly. 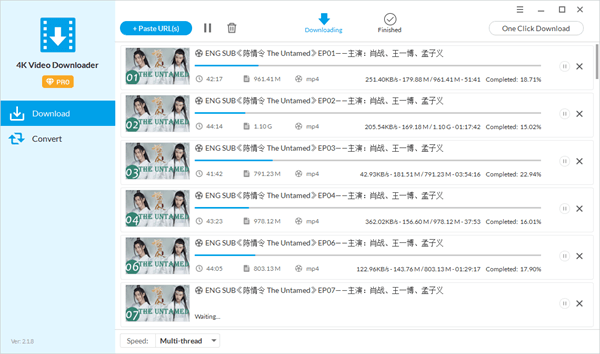 In addition to some of the features mentioned above, this software has many other highlights. For example, in addition to downloading video, it can also convert video to MP3, MP4, MOV, MKV, AVI, and other formats. The downloaded subtitles can be seamlessly merged into the video during the conversion.

Furthermore, it has a built-in subscription feature that allows users to subscribe to their favorite YouTube channel, as long as the channel has a new video upload, it can be downloaded with one click.

Besides, developers consider that when users download multiple videos, there will be multiple pop-ups, specially designed one-click download mode, users only need to set a preference once, the system will apply it to all future downloads by default, which can minimize the operational steps.

All in one, Jihosoft 4K Video Downloader is the best video downloader and converter out there! With it, you can download and enjoy the “The Untamed” Chinese drama anytime, anywhere! If you like our article, please share it with your friends and family so that you can watch your favorite web series with them.