How to Play Unsupported Videos Formats in Windows 10

A lot of Windows users have encountered an error with messages similar to: “Cannot play back the file. The format is not supported.” Windows Media Player, preinstalled in Windows PC, is far from a universal video player. Let alone to say Movies & TV, the default media player in Windows 10. Many people have restored missing Windows Photo Viewer to replace the Photos app in Windows 10, but how to play unsupported video if Windows Media Player doesn’t work? Don’t worry. In this tutorial, we are going to talk about how to fix unsupported video format in Windows 10/8/7. 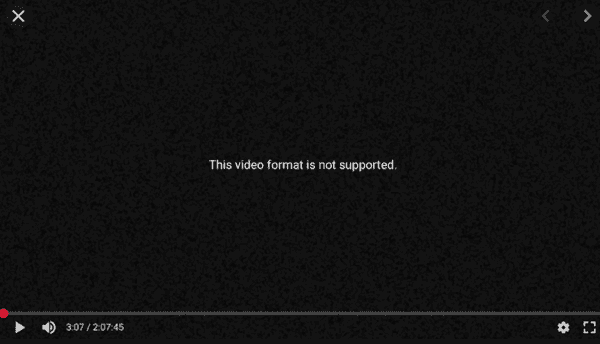 For most video formats not supported in Windows Media Player, it is possibly included in the support list of third-party video players provided by individual developers or teams. Those powerful video players are not necessarily paid software, which means you could play unsupported videos without paying anything but installing an extra program on your PC.

To save you a lot of valuable time, we have hand-picked 3 of the best third-party video players for video format not supported by Windows Media Player or Movies & TV.

In case the tools above don’t work or you simply don’t like them, there are many more free media players for Windows available for your exploration.

If you have a video in a really rare format, you may need to try dozens of tools before finding the one that works. To make the thing easier, you can also choose to convert the unsupported video into another format which is more common even for Movies & TV preinstalled in Windows 10.

Nevertheless, if the video format is so infrequent, you may need a versatile video converting software which supports it as an input video. Jihosoft Video Converter is the best choice for Windows and Mac users to fix unsupported video format as it is capable of converting various videos into any other video/audio formats you prefer.

In addition to video conversion, Jihosoft Video Converter can also help users make basic editing on the input videos with several useful tools, such as trim, crop, audio, subtitle, effect, etc. In other words, Jihosoft Video Converter provides an all-in-one solution for video editing, converting and playing. Don’t hesitate to have a try with it in case you’re encountered with incompatible video issues, such as “No importable files” in Final Cut Pro X.

Some videos can only be played with a certain codec which is used to decode the video file into the proper imagery and audio. If the codec is absent in your computer, that’s likely the cause of “Video format not supported” error. To fix unsupported video format, you need to install additional video codecs.

Such kind of videos are usually noted with the name or description of the required codecs. You can either download every video codec from websites, which could be dangerous, or install a codec pack program, which could be bloated with unnecessary codecs or bundled apps.

Microsoft has discontinued the updating for Windows Media Player for years, so it doesn’t cover all media formats and only works for movies and videos in common formats. If you get the “Video format not supported” error, just follow the solutions above to fix unsupported video formats in Windows 10/8/7. Don’t forget to share this tutorial if you find it useful.