A file format is different from video codec. For instance, AVI videos can contain data that is compressed by a number of different codecs, including the MPEG-2, DivX, or XviD codecs. They can also be not compressed by any codec at all. One of the most common errors you get when the Windows media player cannot play AVI files as below:

When the file type is supported by the player, but it is still not playable, make sure the codec used to compress the video is installed on your PC. 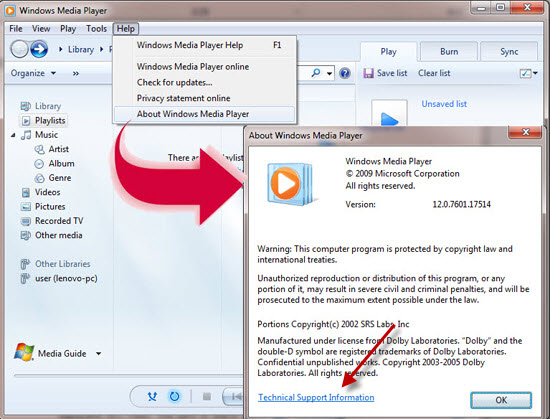 If you can’t find the Help menu, click Organize, point to Layout, and then select Show menu bar.

When you have found the list of all installed video codec for Windows Media Player on your computer, you still need to find out the codec used to compress the AVI files. This is another challenge which there seems not to be an easy way to determine the codec used. Since Windows Media Player can’t play the AVI files, it is unable to help you detect the video codec used in the unplayable AVI video. You have to search for extra codec identification tools on the internet. Alternatively you can download and install a media player which has more video codec built-in, such as the notable VLC media player.

There are actually a lot of media players can play AVI videos better than Windows Media Player. A good AVI video player, such as VLC, includes more audio and video codecs that are not included in Windows Media Player by default. If your windows media player won’t play the avi files, download VLC, it should be able to most AVI videos. VLC is also an open source cross-platform free AVI player, available for Windows, Mac and other platforms.

I have installed correct AVI codec for Windows media player, but still can’t play the video. Why?

Except the file type and codec issues, another prominent reason why Windows Media Player won’t play AVI videos is the corrupt files. If the video source file is broken, your Windows media player can’t play it either even if you have the required codec installed. In this case, you need to fix the broken AVI with video repair software, such as Jihosoft AVI Repair. This tool can repair all kinds of AVI files, fixing the header or index missing issues, video audio stream and codec issues, etc. It can help you fix avi files and troubleshoot most AVI not playing problems in Windows Media Player.