Ctrl + Alt + Delete is the shortcut people often use to go through Task Manager for frozen programs or windows when using their PC. Among the common processes causing a high disk or CPU usage, Software Reporter Tool has confused many people by its name. Moreover, you may find an error while using Chrome because of its presence. Apart from all these, it removes or deletes the apps or extensions which it found suspicious without permission. Because of all these reasons, a lot of users are not pleased with this tool and want to disable Software Reporter Tool in order to fix the interference created by it. If you are one of them, then read the complete tutorial to learn about Software Reporter Tool and the method to block it from the system. 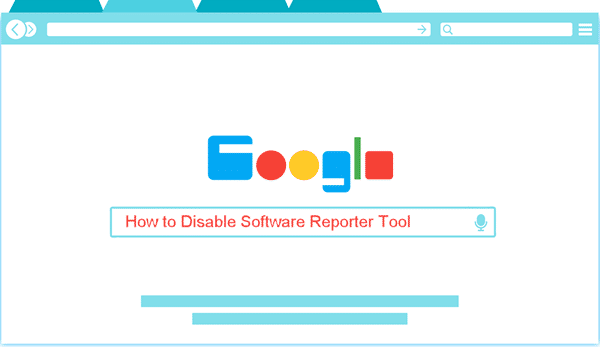 Part 1. What is Software Reporter Tool?

Software Reporter Tool comes under “Chrome Cleanup Computer” which scans the computer’s memory to detect the useless files and software. You will find it as Software_Reporter_Tool.exe executable file which keeps running in the background of the computer system. When you look for its data or description, it will show up as the Software Reporter Tool.

To find Software Reporter Tool, you can head towards the Processes tab after opening Task Manager on your Windows computer. Now, right-click on it and select “Open File Location”. You will be redirected to the location:

You can find the .exe file in this folder. Alternatively, you can simply use the Run dialog box and follow this given code: “%localappdata%\Google\Chrome\User Data\SwReporter”. In this way, you can go to the executable file Software_Reporter_Tool.exe.

Is Software Reporter Tool a virus?

Software Reporter Tool is downloaded because of Chrome browser, so need not to worry about its security. It is a part of the Google Chrome which is unidentified by most users. Therefore, when the users find this executable file running and taking high CPU usage, they naturally take it as a malware or malicious file. However, the antivirus or any such security system will not detect anything from it.

Software Reporter Tool, which is a part of Chrome Cleanup Tool, is capable to scan the computer’s drive and detect the harmful and useless programs, software and apps on the computer’s system and remove them. So, when you find it running in the background then basically it keeps scanning the data and looking for malicious programs on the system. Moreover, it also removes the add-ons and extensions which interrupt in the functioning of Google Chrome.
Software Reporter Tool scans the whole system once a week. Around 25 minutes time is taken by this executable to run for complete scanning.

Pro tips: You can’t be too careful when dealing with malware and suspicious apps, otherwise, a virus could cause painful data loss, in which case you’re recommended have a try with Jihosoft Data Recovery Software to recover files deleted by virus.

If you value the cons over the pros, then you can block Software Reporter Tool.

Before heading to the instruction and steps, you need to know that this will prevent Google from detecting the malware or malicious programs running on your computer. Moreover, your system will get devoid of this useful tool of Google Chrome Cleanup Software. So, it may happen that you will receive problems which will not be detected by Google and you may need to use any other third party application or tool to remove it. It is worthy to note that the Software Reporter Tool is a helpful tool in keeping out the potentially unwanted programs from the computer in a decent manner.

In this way, you have disabled Software Reporter Tool successfully. This prevents any user or program to access this folder by blocking it from your computer. Whether you update the Chrome browser or do any other changes in the future, it will not get activated on your computer. It is a best suited permanent solution to block Software Reporter Tool.

If you face any problem while doing this then kindly let us know through comments.