Snapchat is a hugely popular app across the world that engages users to showcase photos, video, sharing thoughts with friends, chatting with them and a lot more. It’s uniqueness made it a very popular social media platform. Millions and millions of people use the app everyday and billions of Snaps are available of such wide audience. So, exploring Snapchat is an endless job, quite engrossing one too.

Tip: Why isn’t Snapchat working? How to fix Snapchat not working on Android?

It is known for its clear interface and various quality features embedded with it. Though, there are lots of users who does not like the fact that how stringent Snapchat can be at times. But, have you ever thought how great it might sound to save someone else’s Snap without even get notified by others? 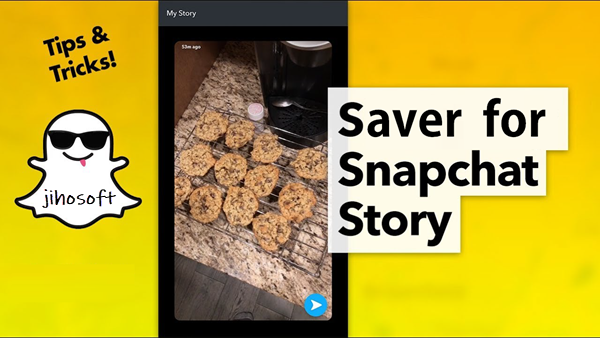 If you even dare try taking a screenshot of your friend’s Snap, then Snapchat takes no delay to inform this to him or her which can be very shameful at times. Thankfully every problem has its own solution, in this case we have a dozens of Snapchat Saver apps to help save Snapchat pictures and stories which you can readily use.

So, in this article to help you get rid of this dilemma, we have done a research and used the apps to finally enlist the best eight of them. The main feature that has been highlighted by all of these tools or apps is to save my Snaps as well as save other’s Snaps effortlessly.

Here’s all of them, find out your best Snapchat saver app for Android, iOS and Windows platforms: 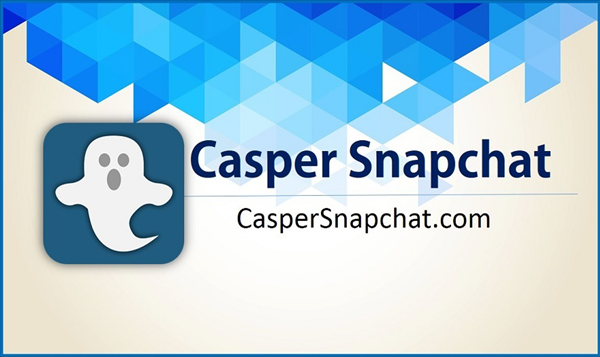 You’ll find the Casper Snapchat saver app very useful if you just want to experience a similar interface to that of Snapchat. This is a new-age Snapchat screen recorder that can be used to save the Snapchat stories as well as Snaps secretly. However, the app is only available for Android devices at this time.

The app has some useful additiontal features including stickers, new filters, a way to forward snaps, and much more. If you want to save Snaps without even connecting your smartphone to the system, then this app might just be a great alternative.

One thing that you should keep in mind is that while using it, you need to stay cautious about as this app is not affiliated with Snapchat Inc. If you daren’t use this Snapchat saver for Android, then you can try this way to save Snapchat videos and photos on Android.

If your saved Snapchat pictures or videos are lost due to wrong deletion or factory reset, here is the Android Phone Recovery that can help you recover deleted photos from Android phone memory. 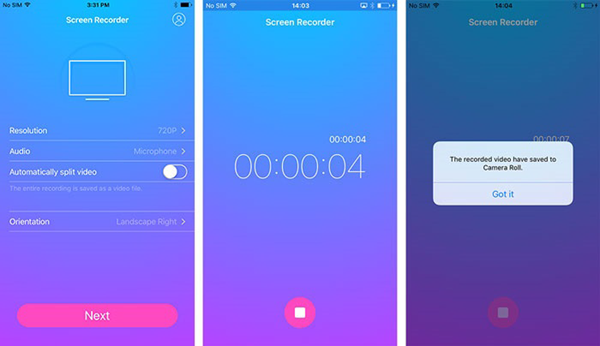 This Snapchat screen recorder can purposefully be used to record almost every kind activity of your iPhone or iPad screen. After saving any picture or saving any video, you can edit it anytime as per your needs. This is a very easy and secure way to save snaps and stories secretly without notifying anyone.

This tool can even be used to mirror your device say on any big screen including TVs or projectors for any of your personal needs. 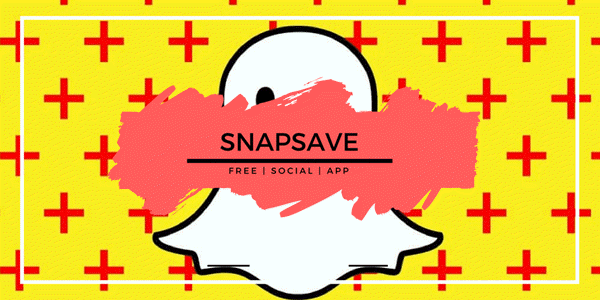 SnapSave is one of the oldest apps available widely in this business to help save Snapchats easily. Though recently SnapSave has not been updated, but it does provide some highly effective results if you are just looking forward to save Snaps readily without them knowing. 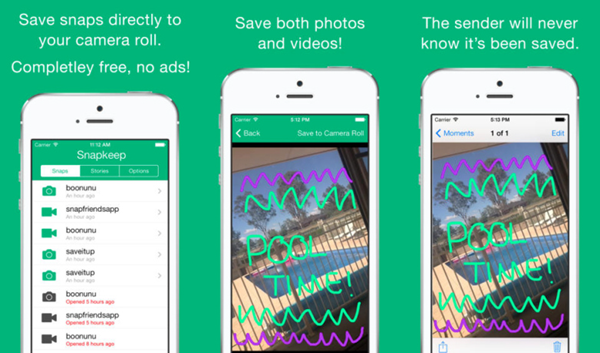 SnapKeep is a neat and clean app with an easy to use interface and proves to be one of the best apps to save Snapchats. You just need to simply download the app which is readily available both for your iOS or Android device and you can simply use it as your default Snapchat app.

Another notable thing is that the app borrows a similar interface to that of Snapchat, so that you won’t face any trouble whatsoever while using it. You can simply draw doodles on your pictures or just upload them directly from your gallery seamlessly without any hassle. Like all other apps, this one too helps you save videos and pictures with just one tap. 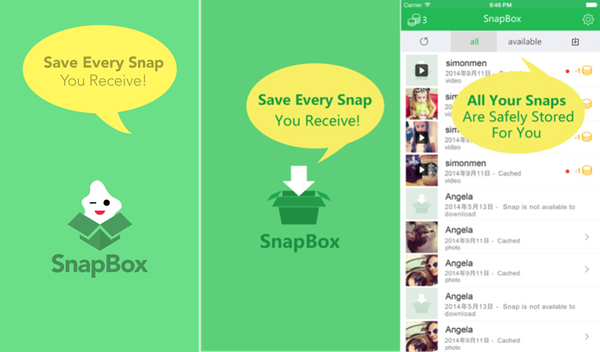 SnapBox is another old Snapchat save app available in this business for quiet sometime now. The app works for both, iOS as well as Android devices. The app’s interface is quite simple and easy to use so, you can easily save Snaps with just a tap.

One thing that you should keep in mind before using this app is to make sure that you must log out of your Snapchat account. With SnapBox, you can easily save Snaps directly to your phone’s memory with no time. The app is available for free and comes pre-included with some extra features as well. 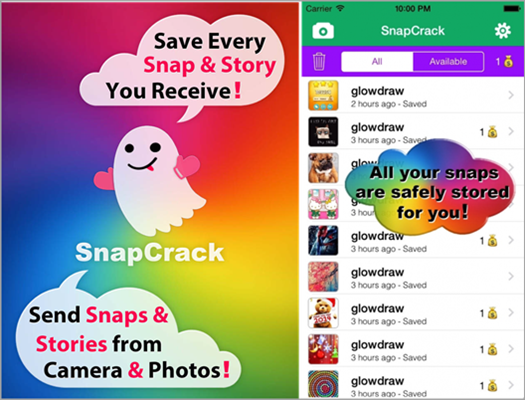 SnapCrack is a very effective and highly modern Snapchat screen recorder that will certainly help increase your social media game. Being compatible with both iOS and Android devices, the app easily lets you save Snaps and the stories with just a tap.

With this app you can later view the pictures you’ve saved and even share it with your other friends. Like any other third-party apps, this one too has some restrictions and you cannot use it with Snapchat simultaneously. 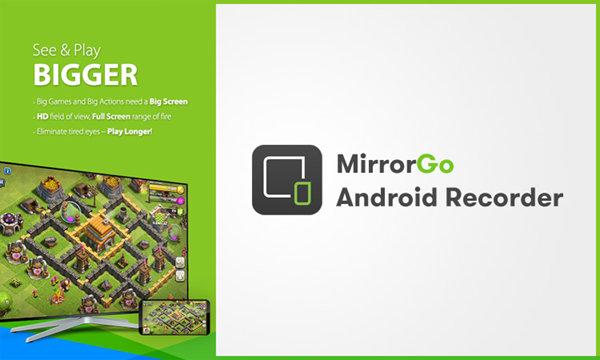 Just like the iOS screen recorder, this app is especially designed for Android devices that lets you mirror your Android smartphone screen to any of the bigger devices wirelessly. Also the app serves to save Snapchat videos or pictures without them knowing.

The app can also be used to mirror any game or even to make any video tutorial. As said, MirrorGo Android Recorder can be used to capture any on-screen screenshots as well as be used to record the screen activity on your Android smartphone. Here are more screen recorder apps for Android that you can choose according to your needs.

Therefore, you can easily use this app to screenshot pictures while using other apps as well as save videos and even daily stories. The app is compatible with almost every Android smartphone and runs even on Windows systems as well. It is very secure and a trusted device to get things done.

8. Saver for Snapchat (for Windows) 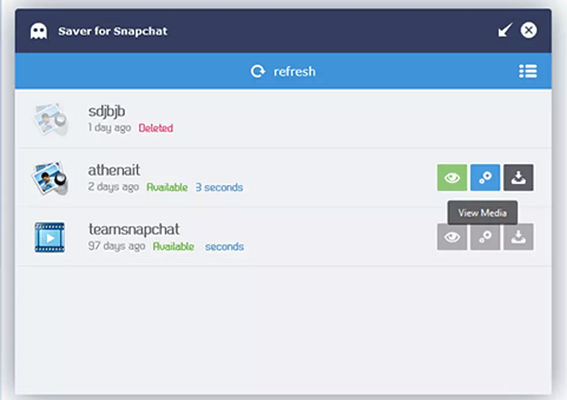 Saver for Snapchat is very unique among all the apps when it comes to saving Snapchats. This app helps you to access your favorite app on your Windows OS. So, with this app you can simply save Snapchat pictures as well as videos to your system without facing much trouble.

This app does its job without any hassle and all that you need to do is to provide your Snapchat credentials to log in to Snapchat and hence use the application. Later, for your benefit, you can save any Snap with just a single click.

So, these were our top 8 picks among the best Snapchat saver apps for Windows, iOS and Android. Each app has its own advantage and disadvantage, and as most of them are free to use you may download any of them and compare each of them to find your perfect Snapchat saver app.

This not only will help you download Snaps of others but also no one can get aware that you’ve secretly kept a Snap that you can see or do whatever you want anytime without any privacy issues. Use the apps wisely and keep being socially active on Snapchat and anytime save your favorite Snaps in just a click.